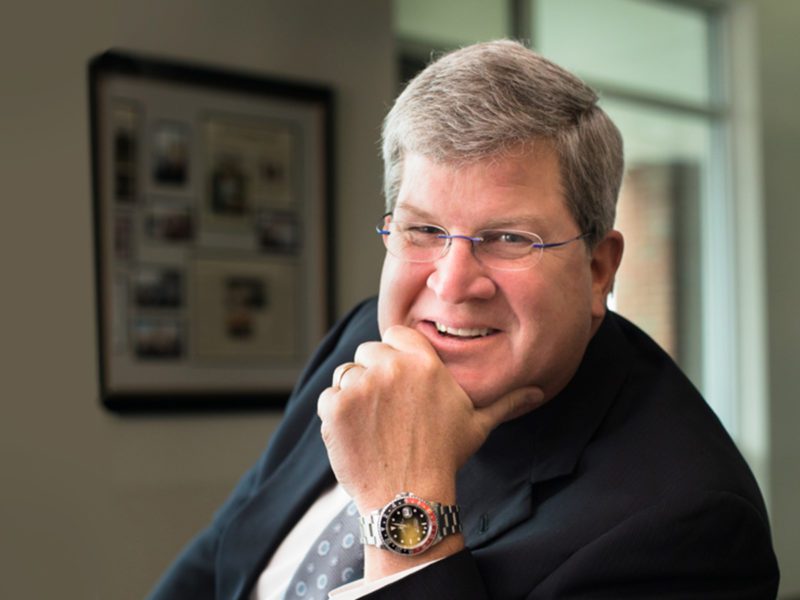 “Many of my clients have said they had nowhere to turn after they were injured, or how to hold someone accountable for what they did — that’s why we do what we do.” Litigation attorney Paul R. Dickinson, Jr. has tried cases that few attorneys have had the opportunity, or the desire, to handle.

Paul has a healthy perspective about the importance of doing his job well for his clients. He once represented the family of a man who was killed by a dump truck down the road from his home in Charlotte — the same road that Paul and his wife use to go to work.

“You never know what could happen to you from one day to the next in ways that impact your or your family’s life. Representing the family in that case drove the point home for me that every day, you go out into the world, and your life could completely change through the negligent acts of another — and through absolutely no fault of your own. With that, you also never know when you might need the help of someone who can hold negligent parties responsible for the impactful consequences of their acts. Many of my clients have said they didn’t know who to turn to after they were injured, or how to hold someone accountable for what they did — that’s why we do what we do.”

Fellow Farrin litigation attorney Gary Jackson, who has known Paul for over twenty years, said, “I have watched Paul grow from a fledging young attorney to a skillful and tenacious trial lawyer. Through his relentless commitment to achieving justice for ordinary people, he has earned a reputation within the legal community as a formidable advocate and powerful adversary.”

The Judge That Inspired Him to Pursue Law

Growing up in Florida, young Paul had no idea he would eventually go to law school. He had gotten his degree in Finance at the University of South Florida, but he ended up working a sales job after college that he did not enjoy. However, he frequently ran into former Florida Appellate Court Judge E.J. Salcines, who told Paul he would make a good lawyer. Paul’s wife also urged him to apply to law school.

Judge Salcines went to South Texas College of Law in Houston, and encouraged Paul to apply there because it had a formidable reputation for creating excellent litigators. Paul discovered his talent and love for advocacy while there.

A Foot in the (Litigation) Door

“I got my start working for insurance companies in Houston. I wanted to get my foot into litigation. I intentionally chose to apply to law firms that focused on litigation because I had zero desire to do any other kind of law. Litigation is what drew me into the legal industry.”

While other first year lawyers were spending time in the library doing research, Paul immediately started working on complex trucking, products liability, and wrongful death cases. He worked with a senior partner and was given the opportunity to work on the biggest cases in his firm. The first trial he ever attended as a lawyer he was the lead — and only attorney — representing his client. Paul’s early experience was invaluable in learning how to be a trial lawyer.

Paul and his family eventually moved to Charlotte in 1993. Since then, Paul’s career has taken off — he has primarily worked in the plaintiffs’ personal injury field, representing both individuals and large entities alike. He has tried cases in the areas of personal injury, products liability, wrongful death, malpractice, business disputes, and more. He has obtained jury verdicts in excess of a million dollars in both federal and state court.1 He has also settled many more cases before they went to trial — many of those for over a million dollars.1 He has tried cases in North Carolina, South Carolina, Texas, and Louisiana, in both state and federal courts.

The Blackwater Shooting: “I can’t believe I’m in the middle of this”

Despite the many big, important cases Paul has handled in his 30+ years practicing law, one in particular stands out. Paul’s “Wow, I can’t believe I’m in the middle of this thing” moment is the Blackwater Massacre case, where he represented the civilian victims and families of those who were injured or killed at the hands of Blackwater private military contractors in Nisour (Nisur/Nissor) Square in Baghdad, Iraq on September 16, 2007.

Blackwater/Xe Services (now called Academi) is based in Moyock, NC and is where agents and contractors are trained for para-military purposes. One of Blackwater’s Iraqi victims contacted a lawyer in Detroit, and that lawyer then referred the victim to Paul, who practices in North Carolina and could therefore navigate the jurisdictional issues of the case. The lawyer needed someone who could handle something this big and complicated (and would be willing to do so), so he called Paul, who took the baton from him.

“We ended up representing 3 of those who were shot but initially survived, plus 3 families of those who had been killed in the Blackwater Massacre. 17 innocent civilians were killed, and 20 plus were wounded that day. At a federal criminal trial, four men were convicted of various criminal charges — including weapons and murder crimes. I was in charge of the victims’ civil law claims. That included the personal injury cases for those who survived and wrongful death cases for the families of those who were killed. I was privileged to represent the family of Ali Kinani, Blackwater’s youngest victim. Ali was a 9-year-old boy who was shot in the head while sitting in the backseat of his father’s car.”

Fighting Against the Odds, Halfway Around the World

Paul’s dedication to his clients really showed through in this case. He would wake up for 3 a.m. video calls with the victims’ families in Baghdad. He’d have to cut through mountains of red tape and work to get medical records and important documents translated from and into Arabic. The case was extremely complicated — having started in state court, being removed to federal court, and then sent back to state court. There was an appeal to the federal Fourth Circuit in Richmond, Virginia in the middle of the case and one of the victims that originally survived the shooting succumbed to his injuries before the case could be completed. The case obtained extensive media coverage, and Paul was interviewed by the New York Times, The Wall Street Journal, The Nation, “Democracy Now!,” and numerous local press outlets, plus French and German TV.

“It was exciting work, and I felt like we were doing something important in getting some justice for these families. There I was, fighting for families of people halfway around the world, against a billion-dollar contractor whose employees took machine guns and rode around in a war zone committing crimes against innocent civilians. My job was to show that what the Blackwater men did was wrong. In civil cases, we try to help people who are victims of sudden, unexpected, and impactful changes in their lives — and don’t have anywhere else to go, other than a lawyer, to help them find some form of justice. I’m proud we were able to do that for these people.”1

The Key to Succeeding in Personal Injury Claims

According to Paul, what he enjoys most about working his cases is that it allows him to get to the bottom of the facts. Trials are all about preparation, and he knows that to do a good job or succeed, hard work and preparation are essential, and that’s just part of his process. Paul employs a combination of careful preparation and cultivating of relationships of trust with his clients.

“I think that great representation starts with a solid personal relationship and a two-way trust between the attorney and the client, especially in a personal injury case where there have been these sudden, traumatic, life-changing events in people’s lives. I know that my clients have to have a lot of trust in me when we’re handling such serious and life-changing events. What drives me every day is the knowledge that these people are counting on me.”

3For more information about standards for inclusion for the “Super Lawyers” list, visit www.superlawyers.com.

4For information regarding the standards for inclusion in Martindale-Hubbell peer review ratings, visit www.martindale.com.