The stimulus checks that most Americans received as a result of the CARES Act were meant to help see them through tough times. Some nursing homes have had other ideas, illegally seizing those funds before they could be used. With another round of stimulus being discussed in Congress, it’s vital to understand what’s happening and what the law states.

Is It Really Illegal for Nursing Homes to Seize Stimulus Checks?

“Our federal partners have alerted us to reports of nursing homes and assisted living facilities attempting to require residents to sign over their $1,200 economic impact payments,” according to a May 15 press release from the North Carolina Department of Justice. “The nursing homes claim that because the person is on Medicaid, the facility is entitled to the money. This is not true and unlawful, and anyone who is asked to turn over their payment to someone else should not do so and call our office.” 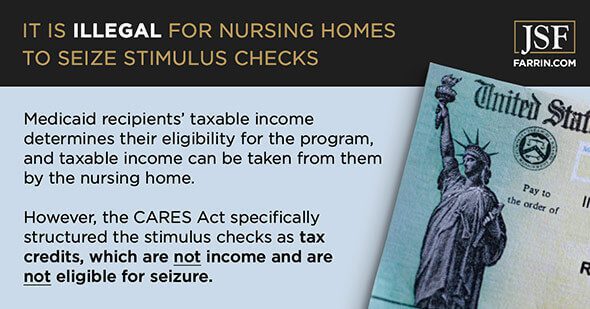 In simple terms, Medicaid recipients’ taxable income determines their eligibility for the program, and taxable income can be taken from them by the nursing home. However, the CARES Act specifically structured the stimulus checks as tax credits, which are not income and are not eligible for seizure. Any nursing home that coerces a resident to sign over their stimulus money – or takes it wholly or partially from their accounts – is illegal!

If you think the problem isn’t widespread, think again. This is a national problem. Senators Chuck Grassley, R-Iowa, and Ron Wyden, D-Ore., called on the Health and Human Services inspector general’s office to issue a warning to nursing homes and assisted living facilities that such practices are “improper and unlawful.” In the House of Representatives, officials from both parties have asked the Centers for Medicare and Medicaid Services to notify nursing homes that stimulus checks are not income, and that the facilities cannot legally claim them to offset care costs.

Why the Law Protects Stimulus Checks

Let’s say some unscrupulous facility tells you or a loved one that they’re required to sign over or give up your stimulus payment. They say the money is owed to them and they’re entitled to it. We know this is wrong, but why?

The CARES Act classified stimulus payments as tax credits. The Federal Trade Commission (FTC) is referring people to Title 26, Code 6409: Refunds disregarded in the administration of Federal programs and federally assisted programs. The code specifically exempts tax refunds and credits from such seizure for recipients of federal aid programs. So, even if the patient/resident owes the facility money, the designation of the stimulus money as a tax credit protects it from these claims.

If you or a loved has been targeted by this behavior, you should contact an experienced attorney immediately for a case evaluation.

Why Is There Confusion About How Stimulus Checks Work?

There isn’t – at least as far as the government goes. For federal and state aid programs like Medicare and Medicaid, the rules are reasonably clear, and state officials like NC Attorney General Stein are emphasizing it. Seizures by nursing homes at this point are generally the result of ignorance of the law or outright greed.

For context, the CARES Act enacted specific protections against the collection of most federal and some state debt, so there is some confusion on the private banking side of things. However, the law temporarily suspends almost all government collection in the form of garnishing wages or tax refunds, and benefits like Social Security, disability, or veterans’ benefits are protected. For example, the federal government will not collect against student loan debt or back taxes through September of 2020.

If You Believe Your Stimulus Check Has Been Wrongly Seized, Contact an Attorney

The government’s initiative to help struggling Americans was meant to help people make ends meet, not line the pockets of nursing home operators. However, when there is money to be had, there will always be people who seek to take advantage of the situation. If you or a loved one have had stimulus funds wrongly taken by a nursing home or assisted living facility, contact an experienced attorney.

Call the Law Offices of James Scott Farrin at 1-866-900-7078, or contact us online for a free case evaluation. We want to help those who have been victimized by fraud seek justice, and hopefully reclaim what was wrongly taken from them. If you are experiencing nursing home abuse, we’re here for you.