If you were at Camp Lejeune from 1953 through 1987, you may have been exposed to toxic chemicals in the drinking water.

The contaminated drinking water on the base has been linked to many serious cancers and illnesses. It’s time to try to right that wrong.

If you were at Camp Lejeune from 1953 through 1987, you may have been exposed to toxic chemicals in the drinking water.

The contaminated drinking water on the base has been linked to many serious cancers and illnesses. It’s time to try to right that wrong.

Camp Lejeune, located in Onslow County in southeastern North Carolina, is home to several major Marine Corps commands and one Navy command. The camp’s mission is to maintain combat-ready units for expeditionary deployment for combat and humanitarian missions abroad. Many individuals trained there for varying lengths of time.

However, from 1953 until 1987, military personnel, their families, and civilian workers on the base may have been exposed to contaminated drinking water.

As these brave men and women trained and prepared to serve our nation, they were potentially using drinking water that is linked to serious and life-threatening diseases – as were their families and the people who supported them on the base every day.

A number of people have contacted us regarding the Camp Lejeune water contamination. Many don’t know if their loved ones spent time on the military base. Their stories are heart-wrenching, and we are working hard on their behalf. Even if you do not know if your loved one trained or was stationed at Camp Lejeune, if they suffered any of the illnesses below, contact us. We still may be able to help.

What Laws Govern How Victims of Camp Lejeune Water Contamination Can Respond?

Due to a North Carolina 10-year statute of repose, individuals were prevented from filing lawsuits to recover damages for any exposure to the contaminated water that occurred more than 10 years in the past. By the time the Camp Lejeune water contamination was discovered in 1982, victims who were exposed in the 1950s, 1960s, and early 1970s or who had delayed adverse health conditions caused by the exposure to contaminated water were left without recourse.

This injustice has recently been addressed by the Honoring Our Pact Act of 2022 (S. 3373) which passed on August 10, 2022, and many people who were made ill after exposure to the toxic water will be able to seek compensation. The new law allows individuals living and working on the base who were exposed to the contaminated drinking water for at least 30 days between August 1, 1953 and December 31, 1987 to file a personal injury lawsuit in the U.S. District Court for the Eastern District of North Carolina.

Every person will have to file an individual lawsuit to seek compensation for harms and losses suffered from exposure to the contaminated water at Camp Lejeune. We are an NC-based law firm, and practice in the Eastern District of North Carolina, and we can be your local law firm.

We can help you fight for compensation. We have fought the government in one of the largest civil rights cases in U.S. history, which resulted in a $1.25 billion settlement.3 We helped more than 18,000 victimized Black farmers submit claims against the USDA. And we want to help you.

And we want to help them.

What Contaminated the Water at Camp Lejeune?

Since the 1950s, two water treatment facilities (Hadnot Point and Tarawa Terrace) supplied water to Camp Lejeune. For decades, the poisonous chemical Perchloroethylene (PCE), commonly used as a solvent by commercial dry cleaners, infiltrated the Tarawa Terrace treatment facility. Meanwhile, the toxic chemical Trichloroethylene (TCE), an odorless, colorless liquid used as a solvent and degreaser for the cleaning of metal weapons and equipment, seeped into the water at Hadnot Point. In 1972, the Holcomb Boulevard Water Treatment plant came online and received periodic transfers of water from the Hadnot Point Water System. And through the 1980s, these plants supplied contaminated water used for drinking and bathing to the military service people and their families living at Camp Lejeune.

How Contaminated Was the Water?

The drinking water at Camp Lejeune was extremely contaminated. The Environmental Protection Agency (EPA) determines the maximum level allowed of a contaminant in water that is delivered to users of a public water system, and the designated EPA maximum safe level for both TCE and PCE is 5 parts per billion (ppb). The following charts demonstrate the extreme contamination levels at both water treatment plants.

The Tarawa Terrace plant had 43x the EPA maximum safe level of PCE. The Hadnot Point plant had 280x the EPA maximum safe level of TCE. 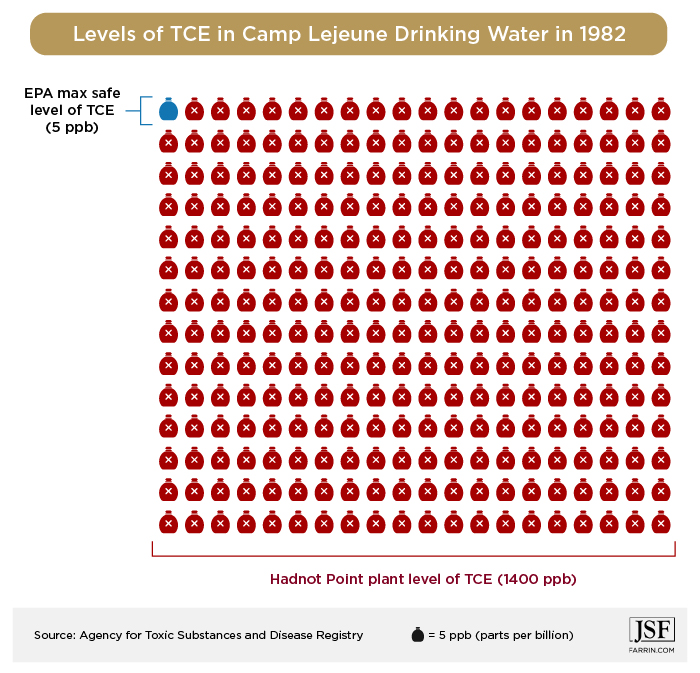 Who Was Affected by the Contaminated Drinking Water at Camp Lejeune?

Marine and Navy personnel, as well as their family members and the workers on base they interacted with every day, were potentially affected by the water contamination. If you or a loved one lived or worked at Camp Lejeune from August 1, 1954 through December 31, 1987, you could potentially be sick with any number of diseases linked to these dangerous chemicals. In reality, anyone who drank or bathed in the water at Camp Lejeune during this time could be a victim.

We recognize that many people may not know the specifics of where their loved ones were stationed or where they may have trained. We encourage you to contact us even if you are unsure if your loved one spent time on Camp Lejeune’s base and is ill. We can try to help you determine if the government owes you compensation.

Consider the following: The Agency for Toxic Substances and Disease Registry (ATSDR) estimated that the average Marine in training at Camp Lejeune consumed approximately 6 liters of water per day for three days per week and 3 liters per day the rest of the week. ATSDR also approximated that under warm weather conditions, a Marine consumed between 1 and 2 quarts of water per hour and showered twice a day. The median number of months Marine or Navy personnel were stationed at the base was 18 months.

It is likely that during training, the water supplied in the field came from the Hadnot Point water treatment facility with levels of TCE and PCE that were substantially higher than the maximum safe level of 5 ppb. If you trained at Camp Lejeune and are ill, the water you drank to replenish yourself may have had the opposite effect. And if your family was there on the base, their health may have been impacted, as well.

In January 2017, the ATSDR performed an assessment of the evidence for the drinking water contaminants at Camp Lejeune and specific cancers and diseases, and it found that Marines, Navy personnel, and civilians residing and working at Camp Lejeune were at increased risk for certain health effects as a result of exposure to the contaminated drinking water. The study concluded that the following diseases (in bold) were likely associated with the water contamination. Additional diseases (not in bold) are also suspected but not mentioned in this specific study: What Should You Do if You Think the Water at Camp Lejeune Made You Ill?

If you or a loved one lived or worked at Camp Lejeune between August 1952 and December 1987 and have been diagnosed with or lost a loved one as a result of cancer or any of the other illnesses associated with contaminated water, call us at 1-866-900-7078 or contact us online for a free case evaluation. You may be able to seek compensation from the government for your suffering or make a wrongful death claim, and we may be able to help.

What Could a Camp Lejeune Water Contamination Lawsuit Be Worth?

The following factors will likely be relevant to calculating potential damages in lawsuits associated with water contamination at Camp:

Our experienced attorneys can help you with your compensation claim. At the Law Offices of James Scott Farrin, we work on a contingency fee basis, which means there is no out-of-pocket cost to hire us because there is no hourly fee.2 We won’t charge you an attorney’s fee unless we collect on your behalf, and then it will be a percentage of the total recovery – our attorney’s fee is contingent on if we recover for you.

We believe that the men, women, and children who lived and worked at Camp Lejeune and became ill and families who lost loved ones due to exposure to contaminated water deserve the chance to be compensated for the harms and losses they suffered. Call us at 1-866-900-7078 for a free case evaluation today.

The Law Offices of James Scott Farrin has been helping victims since 1997. We’ve helped more than 55,000 people fight for compensation for harms and losses caused by others. And we want to do the same for you and your family.