“I receive tremendous satisfaction knowing that what I do helps protect people against forces that work against their best interests, and that I can help people move through disrupting, and sometimes tragic, events which occur in their lives.” Licensed to practice law in North Carolina and Michigan 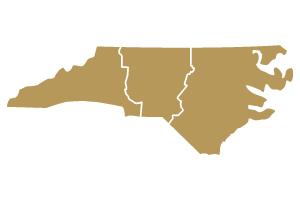 Admitted to practice before the U.S. District Court for the Eastern, Middle, and Western Districts of North Carolina Admitted to practice before the U.S. Court of Appeals

Tara Williams joined the Law Offices of James Scott Farrin in 2002 and became a Partner in 2005.

Tara attended Stephens College in Columbia, Missouri, concentrating her studies on religion and philosophy. She later transferred to Auburn University in Alabama where she completed a degree in chemistry. She received her Juris Doctorate from the University of North Carolina School of Law.

She is a member of the North Carolina Advocates for Justice, and also serves as the Chair for the Law Offices of James Scott Farrin’s Social Services Committee.